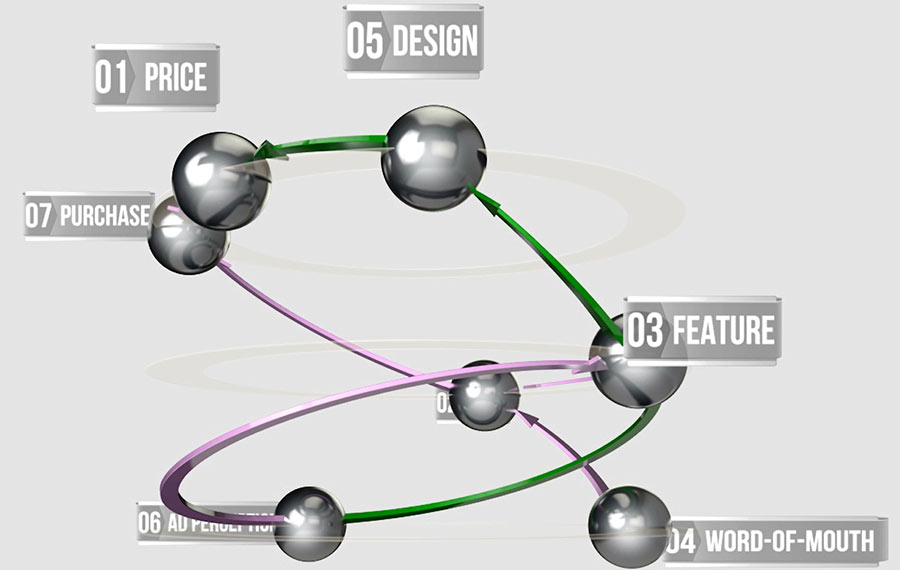 Marketers and market researchers who are hoping to find the most effective actions in data are confronted with dozens of statistical methods.

At some point someone started to rename regression-based techniques as “key driver analysis” in order make it more obvious what they do – figuring out what drives success. However this has not been ‘state-of-the art’ for decades. Companies can prevent expensive mistakes by switching from Key Driver Analysis towards Causal Analysis. Read Why!

The challenge with Key Driver Analysis

Key Driver Analysis has been a major step, helping to guide companies away from spurious correlations and dangerous mistakes. In fact, the term mainly describes regression analysis or similar econometric techniques and comes with its limitations.

Regression techniques estimate parameters of a model which represents the impact of certain factors towards an outcome. Within this model, it is assumed that factors are independent. This means that the parameter is always the same no matter what the situation.

E.g. a bottle of water leads to a certain growth of a tree, no matter how much water it already had and whether or not the tree gets enough sun.As the example shows, these assumptions can be very unrealistic. The techniques are not able to adopt assumptions to data and mostly don’t even consider the nonlinear nature of reality.

On top of this, regression techniques live in a simple world: factors influence outcomes – full stop. When a TV campaign drives Google Adword Views and those clicks then drive sales, a regression method would give the “TV factor” a small impact parameter because with Google Adwords  can perfectly explain sales.

In most real life cases, factors influence each other, just as TV drives Adwords. If you do not consider this, you are not measuring the full impact but only the direct impact.

Key Driver Analysis is simply outdated. UNILEVER first applied it in the 1920’s. It has been around for nearly a century! Companies need a methodologic upgrade to be able to compete in the 21st century.

If we could only quantify the full, and not just the direct, impact, if we could model data with a self-learning system that finds realistic but unknown features such as saturation effect or moderating factors… we would be able to understand much more realistically what drives success or why customers choose a brand.

More importantly: We would no longer be forced to impose unrealistic assumptions or badly founded hypotheses. We would have more effective recommendations and sales and marketing actions. Increased advertising effectiveness will help save millions of marketing dollars.

The roots of causal analysis are a hundred years old as well. It all started with experimental test designs. As well as the fact that many things in business are much too expensive to test, most real life experiments face another issue:

there are other drivers of outcome that cannot be perfectly controlled (e.g. with a perfectly randomized sample). That is why a kind of “Key Driver Analysis” is needed to quantify the impact of factors including the experimental action.

In the 1960s and 70s, regression had been extended to path modeling techniques (Structure Equation Modeling SEM, Partial Least Squares PLS) which are modeling not just direct, but the full effect of causes.

Later in the 1990s, Baysian nets (or Direct Acyclic Graphs) had been developed which, on top of SEM and PLS, can (in simple networks) identify the causal direction between variables out of data.

The age of Machine Learning

All those methods have a common limitation: they are not self-learning systems, as researchers are forced to assume a fixed model – most of the time, they also need to assume linearity and independents of factors (remember the tree example!).

The Universal Structure Modeling approach implemented in the NEUSREL software changed that in 2008. As conventional causal analysis requires making assumptions that nobody can justify in a business context, USM is a true breakthrough for practical applications.

Since 2008, there have been hundreds of business projects conducted with the help of Advanced Causal Analysis, Universal Structure Modeling and NEUSREL. Many reputed scientists have approved the methodology, dozens of papers have been published and highly reputed brands such as Audi, Deutsche Bank, L’Oréal, P&G, Unilever and many more are leveraging these techniques.

These companies understand up to 300 percent better why customers do what they do. They gain insight that was previously unknown. They explore nonlinearities and discover saturation effects and optimas in their data. They learn how factors and conditions interact and how target groups naturally divide into segments. They learn it without knowing or hypothesizing about it beforehand. This enables these companies to step on a learning curve never seen before.